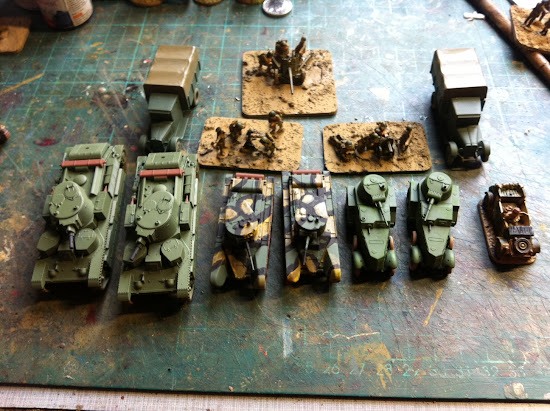 The previous post introduced Byzantium in the 1920's and 30's. I realised I needed some imaginary opponents, and the first state that came to mind was Borduria, from the Tintin books.

To those unfamiliar with The Adventures of Tintin, the Balkan state of  Borduria is mentioned in the 1939 book  King Ottokar's Sceptre, ruled by the Fascistic dictator Musstler (I'm sure you can see where that came from). In the The Calculus Affair (1956), Borduria is depicted as a stereotypical Stalinist regime, ruled by Marshal Kûrvi-Tasch - and the symbol of the Kûrvi-Tasch regime is a large moustache. Here is the Bordurian flag of the Tasch Regime: 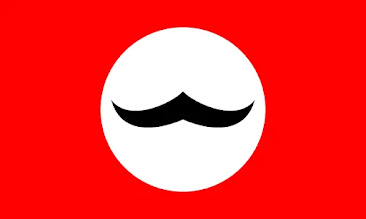 I wanted my Bordurian imaginary nation to be the Kûrvi-Tasch regime and not the Musstler one as (i) the moustache symbol is a must-have and (ii) because 1930's Russian gear looks far cooler than German. So, obviously at some time in the late 1930's the Musstler regime was overthrown via a Soviet sponsored takeover, and Kûrvi-Tasch was set up in its place. One last thing - Tintin's Borduria seems to wrote in Latin lettering but I want Cyrillic - clearly one of  Marshal Kûrvi-Tasch's crash programs was to go Cyrillic like his masters! So, with that:

To bring Borduria into being in the Balkans required a bit of rejigging of history. Since Byzantium's existence depended on it being formed as a class C mandate in 1919 at the partiale xpense of Yugoslavia, it seemed that one may as well throw the whole Balkan settlement up in the air and delete Yugoslavia before it occurred, and allow Borduria and other imaginary Balkan nations to emerge instead.

As mentioned in the preceding Byzantium post, one of the issues in the later 1930's was the smaller states getting equipment from major nations, they tended to produce for themselves and their client states. The Soviet Union was no different, but as a Stalinist client state Borduria has no problems getting (fairly) up to date equipment.

Incidentally, for no other reason than one of the other players has a 15mm WW1 Austro Hungarian army to use in this project, it was clear that Austria and Hungary must still be kept together. But Czechoslovakia had to be hived off in order to keep all their arms exports flowing through to Byzantium and other Balkan imagi-nations, ditto all Austria-Hungary's other Balkan possessions had to be confiscated so various other imaginary Balkan nations could emerge. (More on this later, readers of this blog may recall the 1848 independence  struggles of Trans Syldavia......)

At any rate, for the purposes of Interbellum gaming, Borduria is equipped with all the Russian 1930's stuff I have collected, with the German equipment inherited from the earlier Musstler era (mainly aircraft, infantry weapons and artillery). So in short, Borduria fields:

- They also use the German 37mm Pak 30, and the Russian 45mm infantry field gun.

Raise the Standard of the New Byzantium