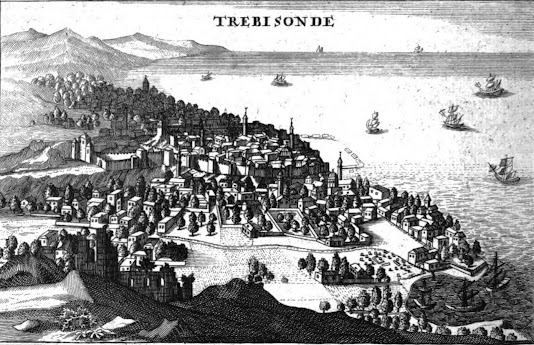 One of my gaming friends has started an Imagi-Nation somehere in Mesopotamia, and I thought it may in some way come into contact with the New Byzantine city of Trabazond, on the Turkish coast so it may be worth thinking about its forces as it is a "special case".

The Turkish province of Trabazond was taken from them by Rssian in WW1 (This is true). To reward Russia for going all Bolshevik, and Turkey for being on the wrong side, it was given to Byzantium after WW1. The real reason was mainly to give the French and British navies a permanent base in the Eastern Black Sea. (This is Imagi-Nation)

The presence of these great powers kept it safe from acquitive hands in the Interwar years, but oddly being taken over by Germany when they overran Byzantium at the beginning of WW2, and then by the Soviets at the end, probably kept it "safe" for Byzantium during the war. It resumed its role as a Great Power naval base after WW2, with the US and USSR now also having access. It was to be returned to Byzantium in 1955, at the same time as German occuption stopped. This probably kept it out of acquisitive hands in that period as well, as Byzantium was in no state to defend it.

After the Suez Crisis in 1956 it was clear to Byzantium that the Great Powers were now the US and USSR and the latter were far closer to home, so it was time to cosy up to the Soviets a bit more. As part of this, a large part the naval facilities at Trabazond were offered to the Soviets for 20 years, the rest would remain "multi national". This probably kept Trabazond in Byzantine hands, and made it an "interesting" city in the peak Cold War years, (but that is the subject of a series of spy novels ;)

At any rate, New Byantium managed to extricate the Soviets in the mid 1970's but then had the very real problem of keeping it from various acquisitive hands in the region. This mainly meant stopping attacks from over the mountains, along the shore, or from the sea.

Population was in the high hundreds of thousands, about half that of the European Themes, so the Thematic forces are about half that of the other Themes. Because of this (did I mention the acquisitive neighbours) there is always a part of the full time Tagmata stationed here, and it is a major Naval base and Air Force base.

Each Theme is supposed to have a full size full time Thematic Brigade and a divional size force of reservists.

However, Trabazond hasn't that level of population, and a lot of hidden strong points in the mountains need are manning. so a lot of the military population is required for that.

The area is essentially full of separate mountain valleys and passes, and each needs a fully capable force to defend it. So the resrvists of all stripes are organised in independent Demi-Brigades per valley area, and deach Demi Brigade has a force with most of the support functions elements of a Brigade.

Ditto, the standing Regulars may need to be split among a number of valleys so they too are organised into 3 self supporting Demi Brigades rather than a full Brigade. There is also a higher use of helicopters here to move forces quickly.

The structure of a Demi Brigade is essentially an allocation of Brigade level support assets into companies (eg of Armour, Artillery, AA, AT, Comms Recconnaisance etc) attached to a Battalion level of troops (and this Battalion may not have the standard 3+1 companies of infantry ).

Raise the Standard of the New Byzantium